More than ever before in the history of Bitcoin, the supply movement of the Bitcoin blockchain has consistently shown a positive affirmation and acceptance as more addresses are now holding a healthy BTC balance.

The on-chain data from Glassnodes has shown how, through February, the growing number of Bitcoin addresses having a non-zero balance of BTC tokens have increased to be the highest in a while now.

Glassnodes also noted that the wallets with a positive balance are now increasingly hodling their tokens, pointing to sharp changes from the norm in the previous years.

The on-chain analytics firm also added that the amount of BTC in circulation in the past three to five years ago reached a high of a little over 2.8 million tokens, which is not a great performance for the world’s largest cryptocurrency network.

From 2019 to 2020, the number of addresses with a non-zero balance has increased following the market valuation of the BTC despite occasional price correction. The growth of the addresses reaches its peak in 2021 when the non-zero balance accounts hit 35 million.

Since then, the growth has continued to spike with each passing day and reaches its all-time high by climbing the 40 million mark in February 2022.

However, the spike in BTC addresses in the last three years ago happened at the same period when the last bullish market reached its peak in 2018. 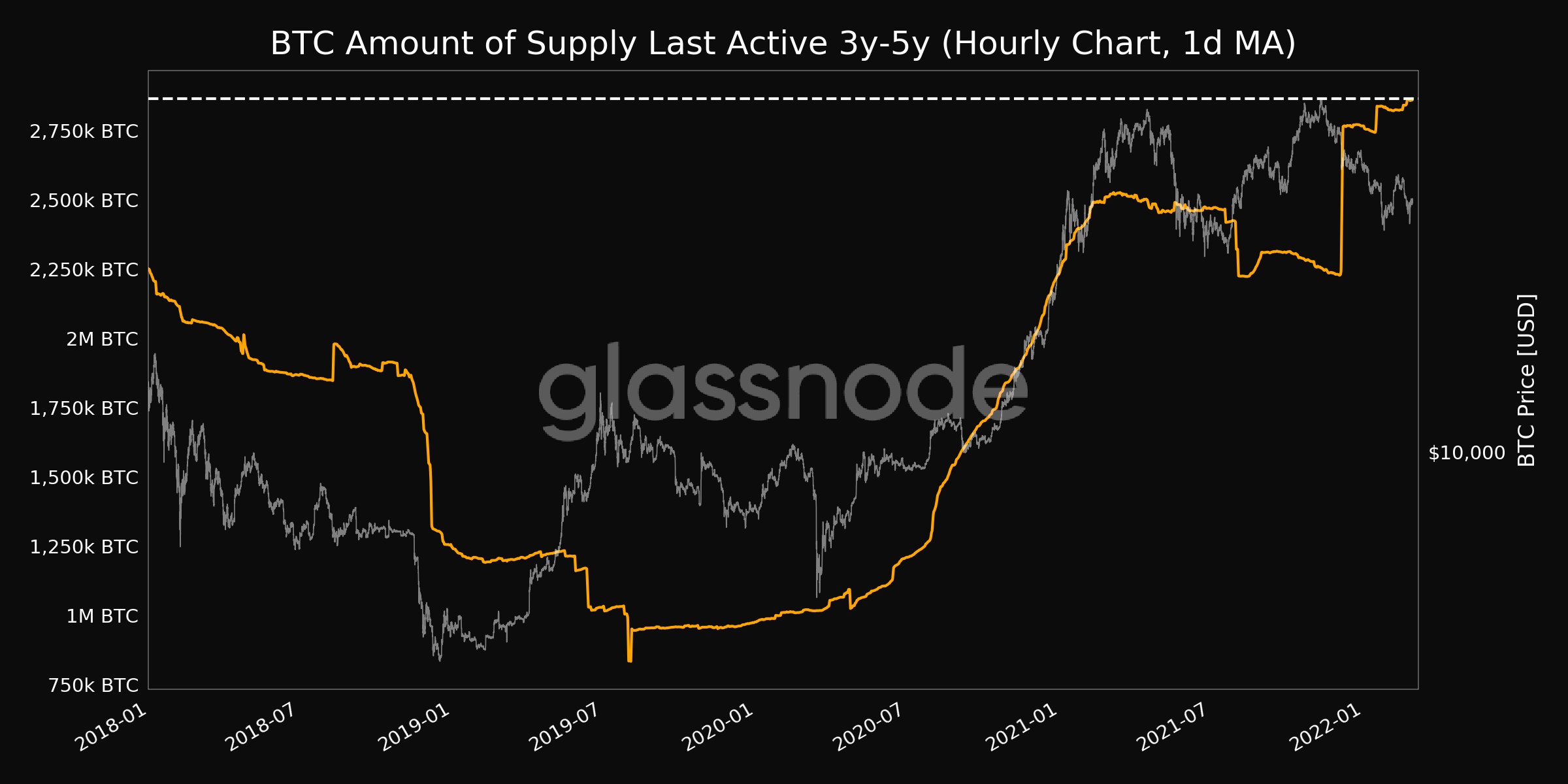 Further breakdown of the addresses with a non-zero balance shows that among the 817,445 addresses, an overwhelming majority of them have held at least a whole BTC, reaching a high of 10 months on February 28.

Additionally, assessing the supply side dynamics of the BTC has provided more insights to evaluate Bitcoin’s performance further this month. According to a financial report company, FSInsight, in its report on February 9, 75% of BTC in circulating supply are considered “illiquid” because there were in a static position with no movement for a long time.

FSInsight also noted that the situation is too volatile and likely to negatively impact the market as soon as a handful of BTC is bought on the market, leading to another extreme market correction for Bitcoin.

Before then, the political unrest in Canada involving truck drivers protesting against some of the COVID-19 measures put in place by the government turns out to be the starting point for the recovery of Bitcoin.

Even though the government later banned the use and circulation of Bitcoin by activating the country’s emergency decree, that did little to sway the rebound of BTC to one side; instead, it has been extensively adopted via donations during the protest.

Another contributing factor to Bitcoin’s rapid recovery is the conflict in Eastern Europe involving Russia and Ukraine. The stand-off reached its tip when the Russian government ordered a military offensive in Ukraine, and since then, the BTC has become a major beneficiary of the hostilities.