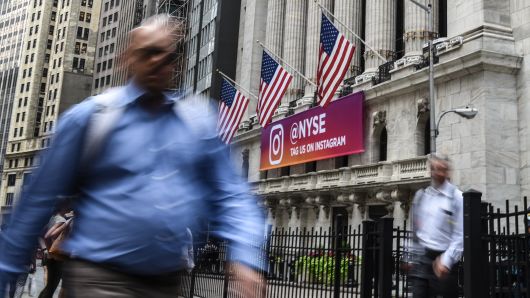 Investors were excited about Apple hitting a $1 trillion market value, but it’s unlikely to result in the one thing the trading community really wants: higher volumes.

It’s no secret that trading volumes have been stagnant for years. But that doesn’t mean no one is trading. The dollar volume of trading — the amount of shares traded times the price of the stocks — has never been higher.

And It’s not just Amazon, which is approaching $2,000 a share, a level that would have been thought absurd even five years ago.

You can attribute this to the relentless rise of the stock market, which is up 50 percent in the last five years, plus the refusal of companies to split their stocks.

The rise of exchange-traded funds and the increasing dominance of institutional investors over mom and pop investors has led companies to rethink things. Howard Silverblatt, who has tracked stock splits for 40 years at Standard & Poor’s, told me that back in the 1990s, if a company had a target range of, say, $60 for its stock, it would wait until it was over $70 and then split the stock. “Stocks used to be priced to individual buyers. No one cares about that anymore.”

Institutional investors, Silverblatt says, are largely indifferent to the price of the stock, since they tend to buy by dollar amount, not stock price.

The result is that stock splits are few and far between. In 1999, nearly 20 percent of the S&P 500 (91 companies) split their stock, an event so common that Standard & Poor’s once had a business that would beep you when a company announced a split.

In 2018, only three companies in the S&P have split their stocks.

The Dow Jones Industrial Average is a price-weighted index, so higher-priced stocks move the index more than lower-priced stocks. The committee that decides what stocks go in the Dow has been reluctant to include especially high-priced stocks because they will dominate the index, but Silverblatt points out that there can be an opposite effect. Those that are included in the index may be reluctant to split because it would reduce their influence on the index.

There’s another impact. The business of stock trading has been declining as fewer shares have been trading. Just look at Amazon. It has average daily volume of 5 million shares. If it had been splitting regularly so it was a $90 stock rather than an $1,800 stock, it would be trading 100 million shares a day to trade the same dollar value.

That’s a huge difference: 100 million versus 5 million. That alone would increase trading volume on the Nasdaq by 6 percent.

This article was posted by Bob Pisani on cnbc.com